Vini Roseti writhes bound in his cuffs, waiting for Woofpigboy to show him who’s in charge. His master comes in bearing a black paddle and smacks it around his taut torso from chest to crotch. Verbally belittling Vini in Portuguese, the stocky Brazilian dom holds his sub by the black bondage mask and pulls his face into his musky pits.

Groaning, Vini bends forward and grits his teeth. “Ahh, yeah!” he responds, getting turned on to the sting of his master’s paddle. 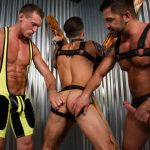 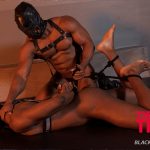