In the year 2049, the earth scorched by the sun and the land bleached with chemicals, there were few people left scavenging the land. The souls that remain were young homosexual men, who were lost with sexual urge and confusion. This small band of beautiful men became a tribe family, with their leader Julian Grey forcing them to work in exchange for, food, shelter and sexual intimacy. A young wanderer is found dying of dehydration and is taken back to the camp, and the epic journey begins as the lost boys make their way into the Sands Of Time.

Casey Everett is that young wanderer, passed out in the scenery of a lush white sands desert in another world. Two local villagers discover his body and see there is a chance to revive him; especially since in the words of one of the village men, he’s “kind of hot.” Back at camp, they are able to revive him with a special elixir, however it appears that Casey has amnesia and does not remember where in space or time he is. There is only one thing that might refresh his memory; the scent of Zario Travezz’s dick and balls. Upon smelling that sweet, musky scent Casey’s memories are erotically charged. Soon he goes to work on Zario’s hung cock, sucking it like a champion. Zario soon returns the favor on Casey’s ass, licking and eating it deeply while also taking turns licking his balls and feet. Bending him over, he inserts his raw, stiff rod of iron into Casey’s pink, puckering hole. If all this doesn’t refresh Casey’s memory, a good hard fuck will do the job. Zario finishes the work by pulling out his long, hard dick and shooting an uncontrollably huge load all over Casey’s chest. But Casey’s adventure has only just begun, as the Sands of Time have more in store for him next week. 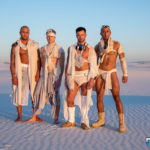