Vincent O’Reilly skates away into a hidden “safe space” lair to relieve that familiar pressure in the groin making his dick and nuts ache. His hands rub the swelling cock inside his leopard print pants as he leans his head back to catch a breath. He licks his shoulder and pinches his nipple. He glances down at his lean young muscles and knows it’s time to drop his pants and get his fist around that big cock.

His junk pops out hard and ready to rumble, and he lightly strokes from pubes to tip of the big mushroom head. The camera looks up at his smooth balls and long, beautifully-shaped straight dick as he works up a jerking rhythm. His body writhes like a sexy feline as electric thrills shoot through his crotch. He slaps the stiff prick against his palm then begins pumping it into his fist. He wags it slowly back and forth, so hard that it points up when his hand is busy rubbing his chest.

Catch all the hot sweaty action of studs on skates in DominicPacifico.com’s sensational ROLL HARD! 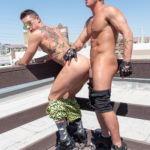 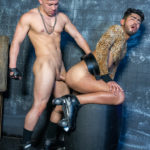