After a halting few sentences in broken Spanglish, they head inside and Biaggi feeds his massive cock to Koons. Cory has to open wide to get the thick caramel-brown tool down his throat. Antonio pulls his shirt up behind his neck, whacking his dick while Cory slobbers on his low-hanging nuts. 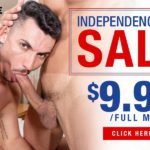 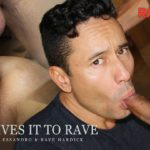