A study in contrasts, of two Latino studs that couldn’t be more different but both looking for the same thing–getting their cocks and asses satisfied. Danilo is pale and solid, with a muscular guy-next-door build. His cock on the other hand–that’s anything but average. Alex is a perfect defined and bronzed Brazilian beach boy, with a thick brown tool and an ass that commands attention.

They start out with a few kisses and tight embraces that quickly heat up to stripping off their briefs and getting their mouths stuffed full of hard dick. Danilo buries his face in Alex’s hard meaty butt, runs his tongue across the tight pucker. A little spit lube is all it takes before Alex is ready to get his bare ass plowed.

Danilo slides in easy with a happy moan, begins with short deep strokes. Alex kneels with his bubble butt stuck back to catch every deep thrust Danilo can muster. Both studs are shaved smooth from pubes to pucker. Alex reaches up to brush back his floppy black hair, almost topples as Danilo rams his booty hard. 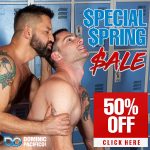 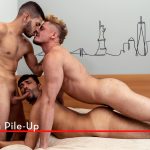