Kaliu pokes out his butt as Pedro dives in to eat out his hungry hole. The hung muscular top is ready to fuck, but takes a moment to get the sexy bottom slick and spitlubed. He wraps his lips around the pucker and sucks deep as Kaliu grinds back into his face. Dripping with saliva, Kaliu’s hole is open and juicy the way Pedro likes it as he pounds his meat in to the hilt.

He grabs Kaliu’s hips and plows in balls deep as Kaliu gasps and groans. Pedro rolls his bottom over onto his back and hold his thighs wide to fill that booty. Kaliu drops his jaw and starts jacking, getting close to the edge. He watches Pedro’s thick tan tool splitting him open, feels the sperm welling up in his nuts. With a low guttural moan he starts spraying his wad all over his tight muscle abs. Do these Brazilian studs know how to fuck or WHAT? 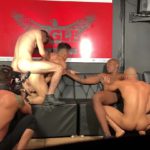