He stands in front of Kaliu and fucks his big tool down his canine-clad friend’s ravenous throat. Saliva drips down Pedro’s woody and his heavy nuts, but Kaliu is not even getting started yet.

He tosses the pup mask aside and the two slurp down each others’ tongues. True to pup form, Kaliu is rubbing his dick and humping Pedro’s leg. Kaliu gets back on all fours as Pedro kneels behind to eat out his round, beautiful ass. Both hot Brazilians are more than ready to fuck.

Pedro rolls him onto his back, lifts up one leg to plow into that hot and juicy, wideopen ass. Kaliu slides his foreskin back and forth over his slick head and groans. A thick wad is welling up from his nuts, and when it geysers out, Kaliu is drenched from navel to the crack of his well-fucked butt. 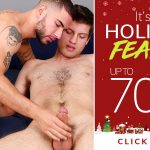 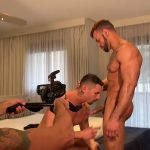