Zbuckz CEO Danny Zeeman praises Pacifico’s move to combine the lush and inventive Latin kink of DominicPacifico with the beauty and sexual drive of the new Brazilian models featured on Rawhole.

“I knew from the start that shooting in Brazil had great potential, but the results have been far beyond anything I hoped for. Now I can combine DominicPacifico and Rawhole into a male raw sex mega-library that has my ultimate stamp of approval. And those studly Brazilians just keep getting better with every shoot. We’ve already signed exclusive contracts with two of them!”

Affiliates are excited to sell the combined site with its huge archive and exciting new updates, plus a bonus section of over 2000 scenes. But the biggest winners are site members who gain full access to the content of two of the greatest Latin male sites around for the price of one subscription. And March’s social-distancing themed “Stay at Home” sale gives new members the first month for a low $9.98. Current members don’t need to do a thing to get access to the new site, as DominicPacifico will redirect to the expanded library at Rawhole.com and their subscriptions will remain active and in place. 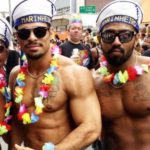