Then Caio steps down to bury his face in Rick’s perfect round ass. Pytter is grinding his crotch around Rick’s face and getting his nuts licked. Rick beats Pytter’s cock and tries to swallow the long hard monster, but gags as it hits the back of his throat. Pytter is on his knees sucking both studs one after the other. Rick crouches to rim Pytter’s tight hole. 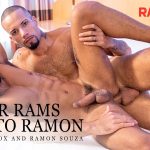