Pure Brazilian masculinity, Joao Miguel has everything to get a viewer’s gonads going. A lean but beefy muscle body, sculpted cheekbones, a sexy little mustache and goatee, massive uncut meat, and a mischievous glint that leaves no doubt he’s always ready to give or take a hard screwing. He’s a raw fucker that loves getting rammed full of cock as much as he loves slinging out a hot fuck to any hungry bottom. Here’s a chance to see him in hard action on both ends of the stick.

Gustavo Muller is next up to bat. Lean and lanky, Gustavo is the first on his hands and knees for Joao to wield his big weapon and slide into home. Both studs glistening with sweat, their bodies knit like clockwork as they ram their booty and cock together in a well-lubed fuck machine. Joao pistons into Gustavo till he fucks a molten spray of sticky sperm out of his buddy.

When Joao jousts limber Kaliu with his mighty fuckpole, it’s like an acrobatic Latin dance. Kaliu stretches one leg up and across the tub’s edge, cock hard and straining just below, and Joao can’t resist nailing this sexy athlete. Kaliu bounces and grinds his ass into Joao’s giant meaty monster with the speed and determination of an Olympian. Down in the hot churning water they stir up waves that threaten to flood the floor below. Kaliu hangs his head over the tub’s wooden decking as his mouth gets a cummy dicking from our jizz-busting Joao. 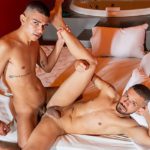